Davy Crockett vs. The Saucer Men 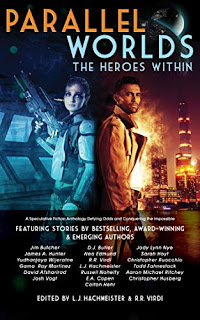 My short story "Davy Crockett vs. The Saucer Men" appears in Parallel Worlds: The Heroes Within.

You can buy the ebook here and the paperback here.

When the anthology was originally conceived, the editors asked each author to write a short introduction to his or her own story. Ultimately these didn't make it into the book, but you can read mine below. I think it nicely sums up my feeling on what is one of my favorite stories I've ever written and (hopefully) serves as a teaser to make you want to buy the book.

Davy Crockett vs. The Saucer Men was inspired by two of my heroes: the frontiersman Davy Crockett and my uncle, Brooks Griffin. I'll start with the lesser-known first.

Like the narrator of the story, Uncle Brooks grew up in small-town Texas during the 1950s. While roaming the town unsupervised, he and his friends played impromptu games of baseball, read comic books, and in his words, "shot a million [imaginary] Indians." (Not the most p.c. game, but it was a different time.) And when "Davy Crockett, Indian Fighter" premiered on Disneyland in late 1954, he was the perfect age to get swept up in the Davy Crockett frenzy that Walt Disney ignited. He had the coonskin cap described in this story (sadly, lost) as well as the Davy Crockett-branded toys mentioned therein. These, along with countless other treasures, he passed down to me. From Uncle Brooks, I inherited my off-kilter sense of humor and Mad Magazine view of the world. (Do I need to mention that he also game me a stack of old Mad Magazines? He did.) And it was Uncle Brooks who introduced me to the King of the Wild Frontier, via a set of taped-off-the-television-commercials-included VHS tapes.

Which brings us to hero number two: David "Davy" Crockett. I will confess that the Crockett I look up to most is not the real, historical figure, though he did many heroic things, not just fighting at the Alamo but also opposing Andrew Jackson's Indian Removal Act, a move which wound up costing him his seat in Congress. The Davy Crockett that looms large in my imagination, however, is the folk hero of the tall tales. The Davy who killed a bear when he was three years old; the Davy who grinned a raccoon out of a tree and made a hat of him; the Davy, in short, portrayed by Fess Parker in Disney's adaptation. "The Disney Version" of practically anything gets a bad rap these days—for being too saccharine, for being too simplistic, for being too . . . Disney.  Some of the criticisms are fair. And in the case of Davy Crockett, Walt took a lot of liberties with the source material. The real David Crockett was a complex, flawed human being (as all human beings are); Disney's Davy was a hero, through-and-through. And while I would never caution against learning more about a historical figure, I think sometimes it's okay to indulge in the fiction. We need heroes. And sometimes tall tales, legends, lies, myths, stories are better at getting at the Truth (with a capital T) than the historical record could ever hope to be. Davy Crockett said, "Be sure you are right, then go straight ahead." Disney's Davy Crockett always was and always did. We need heroes like that.

A final note: though Uncle Brooks and I share many common interests, he is not much of a fan of science fiction. I hope he will forgive me for inserting aliens into his childhood.