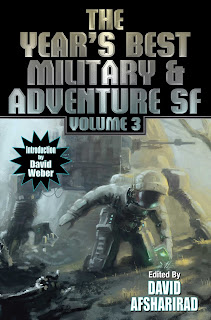 Pleased to announce the table of contents of The Year's Best Military and Adventure SF, Volume 3, which hits bookstore shelves June 6. Of course once you see the lineup we've got this year, you'll want to preorder it, I'm sure, so here's the link to Amazon, for your convenience.

Preface by David AfshariradIntroduction by David Weber“Cadet Cruise” by David Drake“Tethers” by William Ledbetter“Unlinkage” by Eric Del Carlo“Not in Vain” by Kacey Ezell“Between Nine and Eleven” by Adam Roberts“Sephine and the Leviathan” by Jack Schouten“The Good Food” by Michael Ezell“If I Could Give this Time Machine Zero Stars, I Would” by James Wesley Rogers“Wise Child” by Sharon Lee & Steve Miller“Starhome” by Michael Z. Williamson“The Art of Failure” by Robert Dawson“The Last Tank Commander” by Allen Stroud“One Giant Leap” by Jay Werkheiser“The Immortals: Anchorage” by David Adams“Backup Man” by Paul Di Filippo

"Surprise" up at Every Day Fiction

My (very) short story "Surprise" is up at Every Day Fiction today. Click here to check it out.

One of the things I most love about short story collections is when the author writes story notes about each story, so I'm gonna do that now for "Surprise." Here we go . . .

A while back, I had four 100-word stories published by SpeckLit, a fact I shamelessly promoted on Facebook. I got the requisite number of "likes," which is always nice, and a friend from grade school liked them enough that she half-joked that I should write her one for her for her upcoming birthday. Well, who can resist that sort of flattery? Plus, I though it would be a fun writing exercise.

I wrote a 100-word short story with a birthday party theme and called it "Surprise." I sent it to Valerie and either she liked it or was polite enough to say that she did. I told her I might try and sell it, if that was okay with her. It was her story, after all. She said that would be fine. Well, I never sold that 100-word version of "Surprise." I'm not sure I even sent it out. I liked it as it was, but I thought the story might benefit from having just a little more meat on its bones. A couple more trips through the metaphorical typewriter and "Surprise" was now double its original length. I sent it off to Every Day Fiction, where it was met with interest. The editors did ask if I wouldn't mind expanding on a few things, however. I was happy to oblige. The version which appears at the link above was what I came up with, and though I'm rather biased, I think it turned out pretty well. See what you think . . .