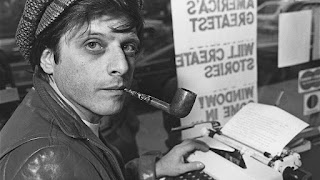 As many know by now, Harlan Ellison died a few days ago. His death is a loss to the world of American letters.

Personally, I discovered Ellison a little too late to be able to say he had a great impact on my writing directly. I say "directly" because anyone writing science fiction or fantasy or horror in the last 40+ years has been influenced by Ellison, even if they've never read a single word he wrote or cracked the spine of one of the anthologies he edited. If he had written nothing other than "I Have No Mouth and I Must Scream" (surely the most terrifying dystopia ever put to paper), he would deserve to be called one of the greatest writers of  fantastic fiction. If he had edited only Dangerous Visions, he would deserve to be remembered as one of the most important anthologist the field has ever seen. But he did much, much more. His impact on the field almost can't be overstated.

He also refused to write on a computer, which makes him a hero in my view.

If you've never read Ellison, do yourself a favor.

In closing, here's Ellison being very Ellison (and also very correct) on the subject of paying writers. It's from a documentary called Dreams with Sharp Teeth, which is very much worth checking out if you're interested at all in Ellison or the history of twentieth century fantastic literature.