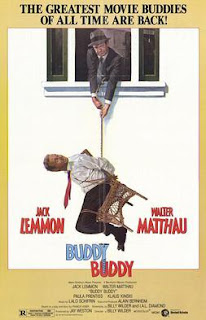 Buddy, Buddy was the last film directed by Billy Wilder, one of the greatest directors who ever lived. It was written by Wilder and longtime collaborator I.A.L. Diamond, the writing team behind Some Like it Hot, The Apartment, Irma la Douce, and The Fortune Cookie. It stars the comedy gold team of Walter Mathau and Jack Lemmon.

And it isn't good. Which is so weird!

In his review of the movie, Roger Ebert proclaimed that Buddy, Buddy contained no laughs. Zero. And while he might be overstating things a bit, I can't really argue with him, either. It's just not funny. It's just not good.

That said, it's not bad, per se. Watching the film was a pleasant enough way to spend a little under 2 hours.

I've turned movies off they were so bad, but I didn't want to turn off Buddy, Buddy.

I've rolled my eyes at the stupidity of movies, but I didn't roll my eyes at Buddy, Buddy.

I've spent hours detailing the plot and character problems in movies, but I have nothing to say about Buddy, Buddy in this regard.

I've railed against certain movies (looking at you Human Centipede) whose very existence feels like an affront to the concept of film making, but I won't go on a rant about Buddy, Buddy.

And of course I've enjoyed bad movies in a so-bad-they're-good sort of what, but not so Buddy, Buddy.

It's not bad; it's just not good. (And I know I've said that several times already, but I just can't get over the fact.)

At some point, I read an interview with someone involved in the movie industry that has stuck with me. I can't remember if this person was a writer, actor, director, producer or what, but he said that there is no way to tell if a movie is going to be great or going to be a pile of hot garbage until you see the finished product. This sounds absurd, but the more I learn about the film industry, the more I believe it to be true.

Let's take two movies from the opposite end of the spectrum: Jean Luc Goddard's Breathless and Star Wars. During the making of both films, the crew supposedly though that they would be a disaster. Yet both films were, essentially, saved in the editing room. You hear about this a lot. Or you hear about movies like Swamp Thing. By all accounts, the script for Swamp Thing was really good. Craven thought it would be his ticket out of the horror movie ghetto. Adrienne Barbeau thought it could be the next Star Wars. Then the budget got cut during filming. Then cut again. Then again. If you've seen the finished product . . . well, it ain't Star Wars, let's just say that.

So no matter how good a movie looks or doesn't look on paper, what matters is the end product. I kept thinking about this as I watched and reflected on Buddy, Buddy. This should have been a comedy classic. First off, there's the pedigree, which I mentioned in the opening paragraph. But even leaving that aside, it's just a really great concept. Mathau plays a hitman who sets up in a hotel room across from the courthouse where a star witness is set to testify against the mob. His job: assassinate the guy as he climbs the courthouse steps and then beat a hasty retreat. Lemmon is a standards and practises executive at CBS whose wife has left him for the founder of a Sexual Research Institute. He's taken the hotel room that connects with Mathau's and plans to commit suicide. Of course, their paths cross and hilarity ensues.

All of the story beats are there, and on paper they're all funny. But on screen they fall utterly flat. Buddy, Buddy is a testament to the fact that when it comes to film making, the whole has to be greater than the sum of its parts.

After all of this, would I recommend watching Buddy, Buddy? I don't know. Maybe? It's certainly a curiosity.

It is a shame that Wilder went out on such a low-note. Probably it's best to rewatch Sunset Boulevard or The Apartment or Some Like it Hot. Or if you want to see what the team of Wilder/Diamond/Lemmon/Mathau were capable of, check out The Fortune Cookie.

But if you want to watch a movie that will keep you scratching your head as to why it's so utterly forgettable when it shouldn't be, in that case, I wholeheartedly recommend Buddy, Buddy.