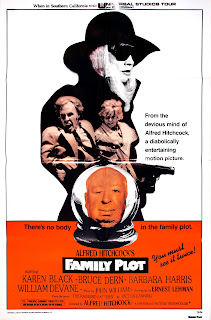 Note: This blog post contains spoilers for a 41-year-old movie. You have been warned.

With Family Plot, Alfred Hitchock ended his career not with a bang, but with a wry chuckle. After the daring and disturbing Frenzy, Hitch was in the mood for some lighter fare, and Family Plot, a cat-and-mouse dark crime comedy, certainly fits the bill. It's relatively minor Hitchcock, but not without considerable charms.

The (family) plot concerns two couples: a sham psychic and her actor-turned-cab-driver-turned-ersatz-private-eye boyfriend, and a pair of kidnapping jewel thieves. The screenplay was written by Ernest Lehman, who also wrote the Hitchcock classic North by Northwest, and some of the witty sex-charged banter of that film makes its way into Family Plot, though much more explicitly that was allowed by the censors of 1959. Family Plot was based on a novel called The Rainbird Pattern, which I have never read, but which Pat Hitchock (Alfred's daughter--you may remember her as the secretary in Psycho who is not Janet Leigh) informs me via the  DVD special features, that it is quite different than the film it inspired. The book's tone is deadly serious, whereas the movie, though not without the trademark Hitchock suspense, is light. In the novel, Madam Blanche has real psychic powers; in the movie, she's a phony. And the novel is set in the English countryside, whereas Family Plot has been transplanted to southern California. It's this last change that works the least well.

One of the main (family) plot* threads is that an elderly woman, the last in line in an old-money family, hires Madam Blanche to find the long-lost son of her younger sister. You see, forty years earlier, the sister became pregnant out of wedlock and was forced to give the baby up lest a scandal ensue. The baby was whisked away in the night, by the family chauffeur. We later learn the child was given to a local couple who had suffered multiple miscarriages. However, the couple died in a house fire twenty-five years before the events of the film, and the son may have as well--or did he? There is one person in the world who knows the true identity of the child, the local parson who baptized the baby before he was given away.

Now, does this sound like Southern California in the 1970s? It does not. It sounds like the sort of story that would take place in . . . the English countryside, which, as I mentioned, is where the novel is set. However, I don't think that this is too much of a problem. Family Plot is clearly not trying to be a deadly serious documentary, and the transplanted plot serves to give the movie a cozy, otherworldly feel that works in a strange sort of way.

So, Madam Blanche and her taxi-driving boyfriend George are trying to track down the Rainbird heir. What about the jewel  thieves?

William DeVane plays Arthur Adamson, a smooth-talking jeweler who has a side business as a kidnapper. He and his inamorata Fran (Karen Black) have been kidnapping high-profile middle-aged men (an out-of-the-box demographic to kidnap, when you think about it) and demanding ridiculously large diamonds as ransom. And apparently it's going quite well!

These two plot threads at first seem to have nothing to do with one another, and watching them converge over the first third of the movie is one of the delights of the film.

That's all I'll say about the (family) plot. I fear I've spilled too many beans as it is. Let's discuss the performances, shall we?

Blanche Tyler is played by Barbara Harris, and she steals the show. The scenes in which she conducts seances for her gullible, wealthy clients are worth the price of admission. Opposite Harris' Blanche is National Treasure Bruce Dern as her boyfriend and co-conspirator George, a Bruce Dern-esque cab driver who spends the movie poking around in things he shouldn't and tapping ash out of his pipe in inappropriate places. The chemistry between the two is great and their arguments are comedic high points. DeVane is appropriately smooth and sleazy as Adamson, and though Karen Black is excellent as Fran, it's a shame she wasn't given more to do. She does cut a striking figure decked out in all black (including a bitchin' 1970s floppy hat) and a blonde wig, however.

Hitchock's direction is, of course, as close to perfect as is humanly possible, and there are several beautifully constructed shots that make you wish more modern filmmakers would do something half as stylish from time to time. I'm thinking of a great cat-and-mouse chase between Bruce Dern and a recently widowed character in an overgrown cemetery. And then there's the edge-of-your-seat sequence when Blanche and George careen down twisting mountain roads without aid of brakes.

One particularly Hitchockian moment occurs early in the film. To this point, we've only been introduced to the Blanche/George (family) plot line. The two are in the car, discussing their game plan for finding the Rainbird heir, when a woman steps out in front of their car. George slams on the brakes, utters something Bruce Dern-y, and then we cut to an overhead shot. The woman walks on, and we follow her into a nearby police station. The woman is Karen Black's Fran, and she's going to the police station to pick up the ransom. It's a perfect way to segue between the two (family) plots. And one cannot help but think of the famous shot in Psycho when Marion sees her boss crossing the street in front of her car after she's stolen the money. (See also: Bruce Willis and Ving Rhames in Pulp Fiction.)

One last thing: the score was written by John Williams, and is excellent, in a great 1970s sort of way. Lots of harpsichord and synth in there.

In conclusion, Family Plot isn't essential Hitchcock, but it is a lot of fun. Definitely worth checking out, if you haven't seen it, and worth another watch if you have.

*Yes, I'm going to do this every time.